Morse code was developed in the early 1800s for the first land-line telegraph systems, as a means of sending messages via electrical impulses over long distances. Morse Code is named after it's inventor, Samuel F B Morse. A modified version of that code called International Morse is in use today by ham radio operators worldwide.

In the beginning days of radio Morse code was the only means available to send messages. Morse code remains the simplest and most efficient way known to send messages via radio. It is easier to construct a Morse code transmitter and receiver than any other communications apparatus, and messages can be sent with very low transmitted power.

Morse code signals (also known as CW, for Continuous Wave) penetrate interference, both natural and man-made, better than most of the more complex schemes. 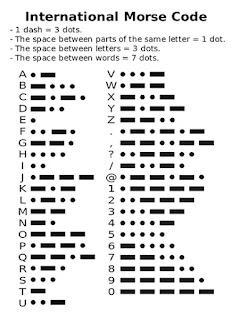